During the Pleistocene, the Earth's northern hemisphere was subject to the waxing and waning of ice sheets. These climate-driven events were associated with the superposition of large ice loads on the crust and mantle - the response to which modified the landscape in both the near- and far-field. For example, in North America during the last major ice advance , a vast water-filled lake, Lake Algonquin, formed over much of what is now central Canada and the centgral-northern USA. As the ice load retreated, Lake Algonquin drained through the Ottawa river valley and, the unloaded land surface rebounded flexurally. 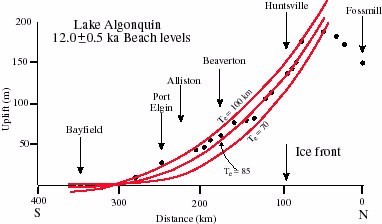 Remnants of former Lake Algonquin are now found in the present-day Great Lakes region. Ancient shorelines are etched in the landscape of large areas in central Canada where flights of wave-cut terraces are observed on vertical scales of several tens of m and horizontal scales of several hundreds of km. 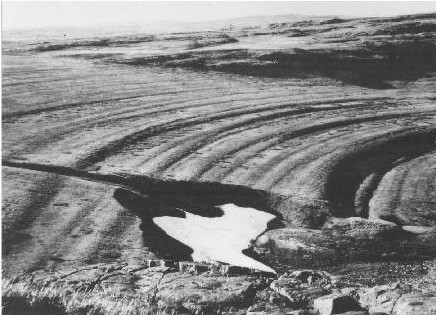 One consequence of ice sheet retreat was the establishment of vast river systems which formed part of an outwash plain in front of the retreating ice front. These rivers were fast-flowing and there is evidence that they excavated and re-deposited material over very large areas of the central and southern USA.

In the UK, the main Pleistocene load centres were located in the upland regions of Wales and Scotland. Large ice sheets extended away from these load centres. As these ice sheets retreated, fast flowing river systems were established. The deposits of these rivers are are now found in the gravels that make up the terraces of south-east England.

In Oxfordshire, between the river valleys of the Windrush and Cherwell, the underlying Jurassic beds are capped by a gravel deposit known as the "Plateau" or "Northern" Drift. The gravels form a succession of terraces that are visible today in a broad area that extends from Gloucestershire in the west to Essex and Kent in the east. The age of the gravels has now been established (e.g. Bowen, 1999) by correlation with the marine oxygen isotope stage record. The Northern Drift, for example, corresponds approximately to oxygen isotope stage 12 at around 450 ka.

The Northern Drift Group contains quartz and quartzite pebbles that were derived from the Early Triassic "Bunter" conglomerates in the Birmingham region. They contain some quartzite and quartz clasts and only a little debris derived from the local Jurassic and Cretaceous rocks of Oxfordshire. The Rev. Buckland, realised as long ago as 1823 that (a) the Oxfordshire pebbles had originated in the English Midlands, and (b) that they had been deposited by a deluge - the flood of Noah - before the present-day river valleys of the Windrush and Cherwell had been established.

Today, the landscape of southern England is dominated by the triangular-shaped topographic depression of the Vales of Evesham and Gloucester and the upper reaches of the Severn and Avon river valleys. The Vales are flanked to the south-east by the steep escarpments of the Cotswold Hills and to the west by the Malvern Hills and the Forest of Dean. The present-day elevation change from the Vales to the flanking hills is in the range of 150-200 m. It is unlikely that the fast-flowing rivers that brought the pebbles from the Birmingham area to Oxfordshire ~450 ka could have traversed such high hills. Therefore, the Cotswold Hills and their north-west facing escarpments are probably young features which formed since the deposition of the pebble deposits ~450 ka. 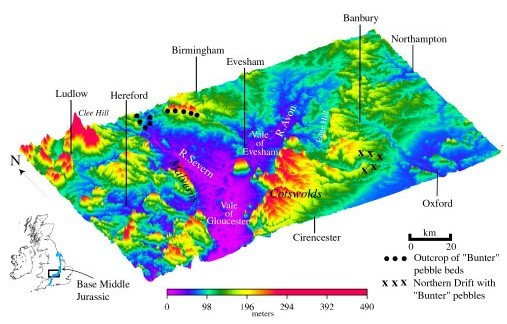 An outstanding question is the origin of the flank uplift. In north Oxfordshire, the Cotswold Hills form a plateau-like surface which has a topographic dip of about 0.5o to the south-east. The Jurassic rocks which make up the Cotswold Hills, however, dip at only about 0.3o. As a result, progressively older beds outcrop on the plateau surface in a north-west direction. The tilted plateau surface of north Oxfordshire is not, therefore, a stratigraphic dip slope but, a surface that has experienced uplift and erosion. This suggestion is supported by the observation of a highly incised drainage pattern on the plateau surface which includes both dip and scarp streams. 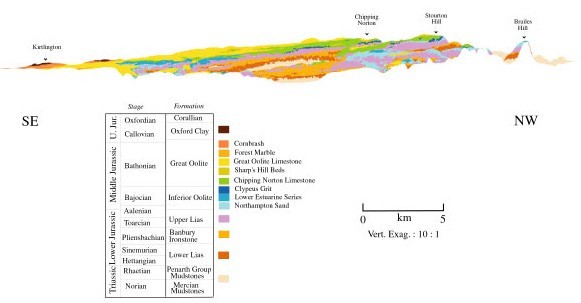 We believe that the most likely explanation of the flank uplift is flexural unloading due to the excavation of large quantities of soft sediments from the English Midlands by melt-water charged rivers. This, tectonically-based model explains:

Flexural unloading models indicate the magnitude of the uplift expected for a range of plausible values for the assumed depth, d, and width of excavation, wand, elastic thickness of the lithosphere, Te. One example of an "asymmetric" unloading model (i.e. one where the excavation has occured in one or more soft beds that already had a gentle dip) is shown in the figure below. The thick line shows the flank uplift associated with a "standard" model in which d = 200 m, w= 45 km and Te = 10 km. A depth and width of exacavation of 200 m and 45 km were chosen , for example, because they approximate the depth and width of the soft Late Triassic and Early Jurassic beds between the escarpment in North Oxfordshire and Birmingham. The thin lines show the sensitivity of the "standard" model to variations in d, w and Te. Increasing d and w, for example, increases the rim uplift. 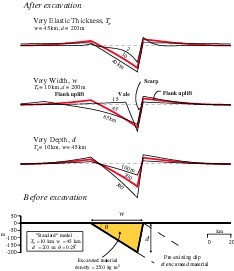 The figure shows that a flexural unloading model in which up to 200 m of soft sediments are removed from a 45 km wide region of the English Midlands is sufficient to produce a tectonic uplift of up to 45 m in areas that flank it. The amplitude and wavelength of the uplift agrees well the observed relief of the plateau surface deduced from the spectral averaging of topography profiles of north Oxfordshire. These results suggest that a) the landscape of south-central England may be much younger than previously thought, perhaps ~ 450 ka or younger and b) tectonics, in the form of lithospheric flexure, maybe an important contributor to landscape development, even in regions such as southern England which are located in the plate interiors, far from plate boundaries. 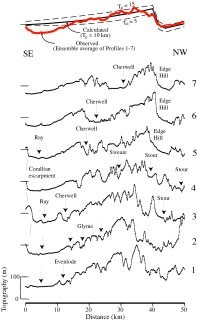